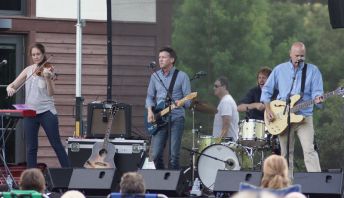 Located almost halfway between the Blue Ridge Mountains to the west and the historic Carolina coast to the east, Durham and Duke are perfectly situated for exploring North Carolina. Durham itself is rich in history and culture. We hope you will take the time to eat, dance, listen, walk and explore this vibrant community.

The links below highlight some of the many attractions, recreation and cultural events that our area holds:

Durham is a creative, innovative community that is always doing something new. It occupies a prime location in the heart of North Carolina and is a nexus for learning, creativity, research, and industry.

Duke’s Nasher Museum of Art is a major center for the arts on campus and in the Triangle area, with art exhibitions and dynamic programs, including Family Days, performing arts events, lectures, film series, and social gatherings. The 65,000-square-foot building houses three large gallery spaces, a museum store, university and community classrooms and the Nasher Museum Café with indoor and outdoor seating overlooking sculpture gardens.

The NCCU Art Museum is a vital teaching resource and cultural institution on the campus of North Carolina Central University.  It houses one of North Carolina’s leading collections of works by African-American artists and others dealing with the black experience.

Want to explore the local arts scene and meet local artists in their downtown Durham studios?  Check out the Durham Art Walk, and Durham Third Friday.

Duke Performances sponsors numerous concerts at venues on and off the Duke campus. Of particular interest in the summer is the Music in the Gardens concert series.

Motorco Music Hall is a bar and 500 plus person capacity venue in Durham, North Carolina. Motorco describes itself as an entertainment complex featuring live music, comedy, and films that is within a short walking distance to the restaurants and bars of Downtown, but located in the Central Park district which is also home to Man Bites Dog Theatre, Geer Street Garden, the recently renovated Durham Athletic Park (former home of the Bulls baseball team), the skate park, farmer's market, and across the street from FullSteam brewery.

The Hayti Heritage Center (St. Joseph’s Historic Foundation-SJHF), is an African American cultural and educational institution deeply rooted in the historic Hayti community of Durham and dedicated to advancing cultural understanding through diverse programs (classes and concerts) that examine the experiences of Americans of African descent – locally, nationally and globally.

In April 1865 Confederate General Joseph Johnston met with General William Sherman at Bennett Place to sign papers surrendering southern armies in the Carolinas, Georgia and Florida. This surrender proved to be the largest of the American Civil War. Today Bennett Place is a historical heritage site open Tuesday through Saturday to visitors.

Duke Homestead is where you can see the early home, factories, and farm where Washington Duke first grew and processed tobacco. His sons later founded The American Tobacco Company, the world's largest tobacco company. Duke and others helped create a market for Durham-area tobacco products that eventually would make North Carolina the heart of an international tobacco empire. Many profits were invested in land and industries but others were used for such humanitarian causes as Duke University, named for the family.

Historic Stagville comprises the remnants of one of the largest plantations of the pre-Civil War South. Stagville offers a view of the past, especially that of its African American community, by allowing visitors to guide themselves around its extensive grounds.

Situated on 55 acres in the heart of Duke’s West Campus and adjacent to the Duke University Medical Center, the Sarah P. Duke Gardens is recognized as one of the premier public gardens in the United States. The Blomquist Garden of Native Plants, the Culberson Asiatic Arboretum, and the Terraces are popular areas for wandering. Take advantage of educational tours and programs along with seasonal plant sales.

Duke Forest comprises 7,060 acres of land in Durham, Orange and Alamance counties of North Carolina and has been managed for research and teaching purposes since 1931. There are miles of trails for biking, running, and hiking.

Duke Lemur Center is the world’s largest sanctuary for rare and endangered prosimian primates. Nestled on 85 acres in Duke Forest, the Lemur Center houses about 250 animals, including 233 lemurs encompassing 15 species, along with lorises from India and Southeast Asia, and bushbabies from Africa. Visits are by appointment only.

Museum of Life & Science is an interactive science park that includes a science center, a butterfly conservatory, a treehouse village for all ages, and outdoor exhibits for rescued black bears, lemurs, and endangered red wolves.

Eno River State Park offers secluded wilderness trails with the serenity of a clear river drifting and cascading over a rocky stream bed. The Eno River is a swift, shallow stream flowing from northwest Orange County into Durham County for 33 miles where it joins the Flat River to become the Neuse and flows into Falls Lake.

West Point on the Eno is a 388-acre park is located along a two-mile stretch of the scenic Eno River, six miles north of downtown Durham. It is also home of the 3-day Festival for the Eno that takes place each 4th of July.

Chapel Hill is a multicultural university town that is home to UNC-Chapel Hill and a resident population of 59,000.Chapel Hill was, in fact, created to serve the University. When the University Of North Carolina Board Of Trustees chose the area around New Hope Chapel as the site for the first State University in 1793, they also named a committee to lay out a town adjacent to the site. Present day reminders of Chapel Hill's history are cherished by its citizens and admired by its visitors; quiet winding streets, wooded home sites, stone walls, and small shops surrounding the University add to the charm, mystique, and "small-town" atmosphere.

Carrboro is the town just west of Chapel Hill. With a population of just under 20,000 Carrboro is the kind of small southern town where the past and the present seem to have been fused into a single moment until it’s no longer one time or the other. Many of the buildings on Main Street and Weaver Street, the two main drags, haven’t changed in half a century—and yet Carrboro is wireless. The heart of the town is a contemporary version of the old country store, but it’s a co-op now and the food is mostly organic.

Ackland Art Museum is an academic unit of The University of North Carolina at Chapel Hill and serves broad local, state, and national constituencies. The Museum's permanent collection consists of more than 16,000 works of art, featuring North Carolina's premier collections of Asian art and works of art on paper (drawings, prints, and photographs), as well as significant collections of European masterworks, twentieth-century and contemporary art, African art, and North Carolina pottery.

Second Friday Art Walk takes place the second Friday of each month in Chapel Hill and Carrboro. More than 30 art galleries and other venues featuring a wide array of art forms participate.

The Arts Center (Carrboro) offers concerts that represent the spectrum of musical genres by local, regional, and nationally touring artists including Americana, Blues, Rock and Roll, Bluegrass, Zydeco and Celtic.

Cat’s Cradle (Carrboro) has hosted bands as diverse as Nirvana, Public Enemy, John Mayer, Joan Baez, and Iggy Pop, with a capacity of 750 people, the Cat’s Cradle allows concert-goers a chance to see established and up-and-coming bands alike in an intimate setting.

Fridays on the Front Porch at the Carolina Inn, free bluegrass music from spring through fall. The Inn also offers a picnic menu ($10 for adults/$5 for children) with beer, wine and drink specials, and plenty of comfortable seating under the shady oaks and magnolias on the Inn’s front lawn.

The University of North Carolina at Chapel Hill was chartered in 1789 and began instruction in 1795, making it the oldest public university in the nation.

Morehead Planetarium & Science Center, one of the largest planetariums in the United States, is located on the north end of the campus of The University of North Carolina at Chapel Hill.

North Carolina Botanical Garden, a part of The University of North Carolina at Chapel Hill, is a conservation garden dedicated to the preservation of native plants.

Carrboro
Carrboro is a walking town; from The Weave, you can go anywhere. Go right, and you’ll run into the Spotted Dog, which is just down the street. That’s where you can go for beer and good sandwich. Veer south and, if you’re lucky, you might run into the Orange County Social Club, or OCSC. Right next door is Acme Food and Beverage Company, where, in addition to one of the best burgers in town, you can drink the not-to-be-done-without Carrboro Mojo, a delicious concoction created when spiced ginger ale meets “Stoly”. Down the street is Akai Hana, a delicious Japanese restaurant owned by Lee Smith and Hal Crowther, two of the many celebrity writers who live here and hereabouts.

Seagrove, North Carolina (1 hr, 45 min.) is the largest community of potters with the longest continual history of pottery making in the United States. There are about 100 shops and galleries scattered throughout the area.

The mountains of North Carolina offer opportunities for hiking, kayaking, sight-seeing and shopping. You can visit black bears on Grandfather Mountain, climb the highest peak east of the Mississippi at Mt. Mitchell State Park, take on some white water on the French Broad River, or explore the famous Biltmore estate and browse in the numerous galleries in Asheville. Here are some links to get you started on a North Carolina mountain adventure.

From pirates to lighthouses to wide sandy beaches, the North Carolina coast is full of things to do and see. Find out why North Carolina license plates say ‘First in Flight,’ tour a battleship from WWII, delve into the mysteries of the Lost Colony at Roanoke, or just swim in the ocean and enjoy the Carolina summer sun. Here are some links to help plan your weekend beach getaway.

Wrightsville Beach is your fastest choice for a trip to the beach, located about 2 1/2 hours east of Durham. Nearby Wilmington is a historic port and is the docking place of the USS North Carolina, a WWII battleship. The Riverfront area also boasts many shops and restaurants.

Morehead City & Historic Beaufort (3 hrs.), one-time residence of the pirate Blackbeard and current home to the Duke Marine Lab, is a great place to visit. Also located nearby is Fort Macon State Park, and one of the NC Maritime Museums.

The Outer Banks (4+ hrs.) is a 200-mile long string of narrow barrier islands off the coast of North Carolina and a small portion of Virginia. It is a longer trek than Wilmington or Beaufort and offers more than can be done in a weekend. Here are some highlights: